I am dismayed to learn from reading this report that almost half of the twelve thousand structures listed in the Historic American Buildings Survey of the National Park Service have already been destroyed.  This a serious loss and it underlines the necessity for prompt action if we are not to shirk our duty to the future.

– Lady Bird Johnson in With Heritage So Rich, 1966

In the waning months of 1964, a small group of preservation advocates, beleaguered by nearly two decades of Federal transportation and urban renewal programs that decimated historic communities across the country, gathered to strategize about a new national framework for historic preservation. They wondered whether the “progress” ushered in by the post war economic boom could be redefined in ways that would respect, and even enhance, historic places? Those efforts would eventually lead, in October 1966, to the adoption of the National Historic Preservation Act, the most comprehensive and fully articulated law protecting historic places in the United States.

The country is preparing to mark the 50th anniversary of the NHPA in 2016, and there are many preservation accomplishments to celebrate, but also much left to be done.  Preservation50, a coalition of national preservation organizations and agencies is organizing the celebration of the NHPA anniversary and they need your input and involvement.

A nation can be a victim of amnesia.  It can lose the memories of what it was, and thereby lose the sense of what it is or wants to be.  It can say that it is being “progressive” when it rips up the tissues which visually bind one strand of its history to the next.  It can say it is only getting rid of “junk” in order to make room for the modern.  What it often does instead, once it has lost the graphic source of its memories, is to break the perpetual partnership that makes for orderly growth in the life of a society.

A steady chorus of preservation advocates, organizations, philanthropies, and even the Federal government itself had been calling for a more robust national preservation program since the early 20th century and those efforts found fertile ground in the reform-minded 1960s.  A small handful of preservation laws and policies had been enacted in the pre-WWII era, most notably the Antiquities Act of 1906 and the Historic Sites Act of 1935, but they were limited in scope and designed to identify and protect  those places with true national significance.  Cities like Charleston, Savannah, and New Orleans pushed the boundaries of municipal law by enacting ordinances to protect some of their iconic neighborhoods, but by and large there were few formal options for calling attention to and preserving the historic buildings that were the backdrop to most Americans’ everyday lives. 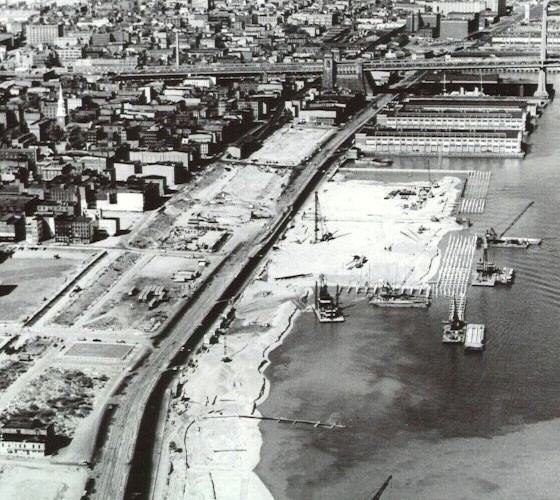 Clearing the Philadelphia waterfront fro the construction of I-95 in 1968. http://www.pahighways.com/interstates/I95.html

The 1950s was a decade of change in the U.S.  Cars, suburbs, G.I.s, the Baby Boom – all of these factors altered the landscape in ways that seem commonplace and even expected today, but were radically different from the pre-War communities most Americans called home.  But equally impactful was the aftereffects of these forces – the rapidly emptying city neighborhoods, the shifting of retail activity from Main Street to the shopping mall, and the need for bigger, faster, and just plain more roads.  Enter the Federal government’s responses: Urban Renewal and Interstate Highways.

We do not use bombs and powder kegs to destroy ireplaceable structures related to the story of America’s civilization.  We use the corrosion of neglect or the thrust of bulldozers…Places where great American voices were heard, or where great acts of valor were performed, are lost.  Connections between successive generations of Americans – concretely linking their ways of life – are broken by demolition.  Sources of memory cease to exist.

Why then are we surprised when surveys tell us that many Americans, young and old, lack even a rudimentary knowledge of the national past?  We ourselves create the blank spaces by doing nothing when the physical signs of our previous national life are removed from our midst.

– Albert Rains and Laurance G. Henderson in With Heritage So Rich, 1966

It didn’t take long for preservationists to realize the effects that these seemingly well-intentioned programs would have on the nation’s historic communities – abandonment and destruction.  The National Trust for Historic Preservation, itself only chartered in 1949, and the Colonial Williamsburg Foundation, convened the first national conference on historic preservation in the fall of 1963.  This gathering was, in some respects, less about education and more about responding to the unfolding crisis for historic places and articulating an agenda for action.

The published proceedings of the Williamsburg Conference, Historic Preservation Today, formed the core of the advocacy efforts that began in earnest just a year later.  The follow up lobbying efforts were led by Carl Feiss, an experienced restoration architect and Laurance G. Henderson, Director of the Joint Council on Housing and Urban Development.  Together they crafted a plan to form a committee to study the preservation laws of several European nations and draft recommendations for Congress to consider in the United States.  The committee was convened in 1965 by the U.S. Conference of Mayors, whose member communities had been on the receiving end of the top-down renewal and transportation programs, and chaired by U.S. Representative Albert Rains (Alabama) and Senator Edmund Muskie (Maine).  Other members included Rep. William Windall (New Jersey), Gov. Philip Hoff (Vermont), Raymond Tucker, former mayor of St. Louis, Gordon Gray, Chairman of the National Trust, Secretary of the Interior Stewart Udall, Secretary of Commerce John Connor, Secretary of Housing and Urban Development Robert Weaver, General Services Administration Administrator Lawson Knott, and a host of staff and technical consultants. The National Trust reprinted With Heritage So Rich in 1999.

In January 1966 the Special Committee on Historic Preservation of the United States Conference of Mayors published their findings and recommendations in a volume that would influence the national preservation movement for decades.  With Heritage So Rich was more than a technical report.  It was a photo essay showing the splendor and beauty of historic places, both large and small, throughout the United States.  The written words expressed the moral imperative facing Americans at mid-century – do not forsake all that past generations worked so hard to build – and the urgency with which that imperative must be undertaken.  Lady Bird Johnson wrote the Foreword.  The book concluded with 10 pages of policy recommendations crafted by the committee based upon their experiences in Europe and the unique challenges facing the United States.  Every one of those recommendations would eventually be included in the resulting legislation.  President Lyndon B. Johnson signed the National Historic Preservation Act into law in October 1966.

What Does the Future Hold?

The past need not be merely the neglected prelude to the present: it can be used as part of a richer future.  The obstacles to such wise use are many, as this and other papers testify.  The past has already paid its debt to us: it is now our responsibility to keep alive the best of it to pay our debt to the future.

– George Zabriskie in With Heritage So Rich, 1966

Over the past five decades, preservationists, politicians, citizens, and scholars have debated the concepts and programs encapsulated in the NHPA, and those debates will continue over the next five decades; they must continue to maintain relevance.  But no matter how you feel about the phrasing of the National Register criteria or a particular clause in the Section 106 regulations, we should all use this anniversary as a reason to reflect on the bigger picture successes of the National Historic Preservation Act and think carefully about how it might be improved upon for future generations.  Share your thoughts on what historic preservation might look like over the next 50 years by taking the Preservation50 survey today.